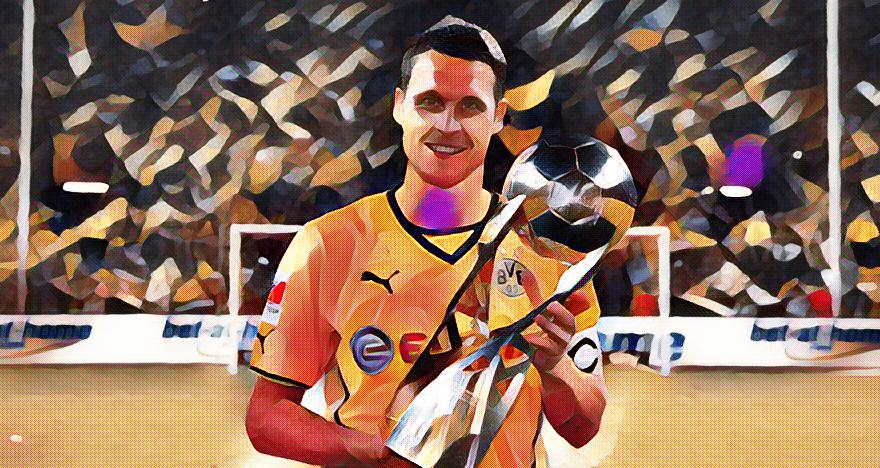 After starting his career in Hannover, Kehl moved to Freiburg and was a big part in their UEFA Cup qualification. So much so that he caught the attention of giants Bayern Munich. Usually in these situations, Bayern snap up the young prospects early, in this instance Kehl didn’t like how negotiations were being handled and rejected the Bavarians. The following season Freiburg were on course for relegation and in the January before their impending doom, Kehl made his move; his destination; BVB.

It was there where he transitioned from a sweeper into a defensive midfielder and one that remains irreplaceable in the eyes of Dortmund fans. Mostly making appearances from the bench, Kehl celebrated his first season at BVB with the Bundesliga Championship. Imagine turning down an opportunity to sign for Bayern and winning the Bundesliga a year later; what a story!

The following season Kehl and BVB were unable to retain their title and finished 3rd, 17 points behind runaway winners Bayern.  It was then that financial issues started to immerge and the following season Dortmund finished in 6th place. This was the beginning of a torrid time for the club as their stars were sold to help fund the financial crisis, Kehl was one of few who stuck around to see things through. With Dortmund finishing 7th, 7th, 9th & 13th things were going from bad to worse and by this point the club was made up of pretty mediocre quality. Kehl suffered a serious knee injury which kept him out for the entire 06/07 season and due to the faith shown to him from the club and supporters he stayed on aiming to repay that faith.

After a dreadful 13th place finish Jürgen Klopp was appointed manager and with his charisma, passion and aggressive brand of football, the Dortmund faithful were optimistic towards the change. Klopp’s first task, appoint a new captain; up steps Kehl. He had fit the bill that Klopp saw in a leader, his positional play, discipline and desire to fight for the team were the exact credentials that made him the ideal candidate.

Kehl suffered two more serious injuries in the coming years which introduced the immerging youngster Sven Bender and Nuri Sahin. Kehl was always around and whether it be on the field or in the dressing room, his influence on the side was key in Dortmund’s rise under Klopp. In 2012 Klopp’s Dortmund won the league a cup double, the Bundesliga 10 years on from their last title and 10 years from when Kehl joined the club. Many of the immerging stars like Lewandowski, Gotze and Hummels will take the plaudits but Kehl was the under the radar, vital piece in the jigsaw.

His main responsibility was to sit in front of the defence and mop up any loose balls that may pose a threat. He was in a similar mould to Kante, before Kante turned up a made a name for himself. Even in his advancing years, his energy levels were high and that suited Klopp’s high pressing system. The thing that made Kehl such a hit with the fans on top of his reliable protection of the defence was his passing ability. When Dortmund were on the attack, his positioning as a deep midfielder more often than not saw him have the time and space to play a precise pass to a more advanced team mate. But he wasn’t just a good passer of the ball when given time and space, even under pressure his passing skills at a higher tempo matched the style Klopp wanted.

The beauty of Klopp’s system meant that any one of the midfield 3 could act as the attacking threat, although Kehl’s job was to be the barrier, his later surging runs often left the opposition bamboozled. How often do you see a defensive midfielder charging into the box, sprinting past attacking midfielders and strikers to get on the end of a cross; only one man, Kehl.

His strength, vision, athleticism and determination highlight that Kehl was one of those midfielders that has almost everything. His cool head and discipline could mean that in highly pressured situations he could maintain composure and always seem to be in the right place at the right time to win the ball back. It’s why he managed to represent Die Mannschaft on 31 occasions scoring 3 goals.

After another serious injury, Kehl decided to call time on his playing career at the end of the 2014/15 season at the age of 35. The same year the Klopp decided to also call time on his 7 year journey with BVB.  It makes you wonder what Kelh’s career could have been like if he did decide to sign for Bayern? And what would have been if he didn’t suffer the amount of long term injuries? All hypothetical of course, but regardless of that, Sebastian Kehl will always be remembered as Capitano, a warrior for Dortmund who will always live in the shadows of Klopp’s attacking stars, but appreciated by all fans.