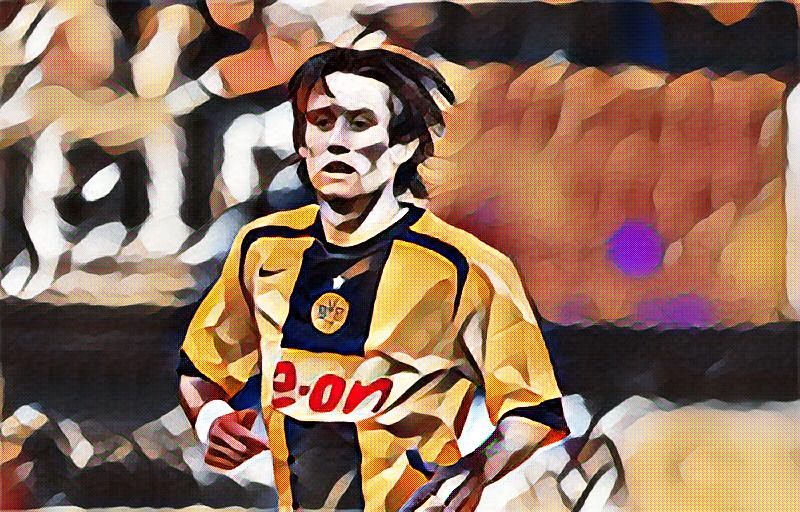 Football; a game that requires intelligence, technical skill and athleticism. Tomáš Rosický, in his developing years, was one of the hottest young talents in Europe. And with the brain and technique of a seasoned veteran, Tomáš looked destined for greatness.

Rosický came through the ranks at hometown club Sparta Prague during the late 90’s and made 60+ appearances over a three-year period. He stood out in the Czech League as a real emerging prospect in this time at the club, and in the 99-00 season, he claimed the prestige title of ‘Young player of the Year’. In addition to this, during Sparta’s Champions League campaign, he scored goals against Shakhtar and Arsenal. This caught the eyes of bigger clubs around Europe and many were watching him over the next year, keeping an eye on his development. This didn’t faze Tomáš and in 2001 he became the most expensive Czech player to be sold to a foreign club. Borussia Dortmund was his destination, with BVB paying 25 million Deutschmarks (£8 million). At the time, this was the Bundesliga’s most expensive transfer. Would the price tag affect his game?

Tomáš’ style seemed to fit the Bundesliga perfectly, even at a young age his intelligence on the pitch was way above where it should have been at the time. As a student of the game in his developmental stages, he shouldn’t have adapted the way he did, but he shone through and made smart, clinical decisions in high pressured games. To go with his intelligence, Tomáš had the technical ability to make the most difficult things look effortless. His passing ability and composure on the ball made him a very deadly playmaker in the final third. This is how he acquired the nickname ‘The Little Mozart’ because of his ability to ‘orchestrate the midfield’.

Tomáš was instrumental in his first season with BVB and his side lifted the Bundesliga title. The way he glides past players is so graceful. He wasn’t gifted with a terrific amount of pace, but the way he glided across the pitch with the ball made it look like he was lightning fast. Whether he would be positioned on the right or through the middle, Tomáš’ ability to control a game with his dictating of the tempo and control of the football stood out as a very talented young player with a bright future ahead. The fact he had stepped up and was doing it in a top European league and breaking into the international side proved to everyone that this kid was the real deal. In the same season, Dortmund reached the UEFA Cup final but narrowly missed out to Feyenoord, losing 3-2, which would have capped off an outstanding first season for Rosický.

The following season ‘The Little Mozart’ continued where he left off and had another very good season, he was really starting to build a reputation for himself as one of the most exciting prospects in world football. That was in a season where Dortmund failed to retain their Bundesliga title, in a campaign which was hugely disappointing on a title defence front as they finished 3rd, 17 points behind eventual winners Bayern.

The following years were not as joyful for Rosický as a number of injuries kept him out for long periods, battling with fitness and a Dortmund side that were in decline. Financial aspects at the club had been spiralling out of control, with big name stars leaving Dortmund. They finished the next season in 6th place, missing out on Champions League football and the financial rewards that came with it. Followed by a 7th place finish the next year, Dortmund were in freefall and Tomáš was struggling to get back to his best. He seemed to lose a yard of pace after reoccurring thigh and hamstring injuries, something that would continue to plague him throughout his career.

In 2006, after a number of disappointing years and being heavily linked with Atletico, Rosický was transferred to Arsenal. This was a fresh opportunity for him and Dortmund were still in need of the money. At the age of 26, his injury problems stunted his development, but the Gunners wanted him to step in and be the ideal replacement for Ljungberg. Arsene Wenger knew that he wasn’t going to be the dynamic young star they faced back in 2000, but with his intelligence and passing ability, he could be that tricky wide playmaker that Wenger preferred.

Wenger described Rosický using a number of compliments during his time at the club that truly epitomised what kind of player he really was:

“A solid playmaker with great technique, with skill on the ball and super sharp passing. Rosický is a special talent with remarkable vision and touch, one thing he never lost. The ability to almost freeze time and comfortably play a precise pass at the perfect moment, it was just effortless”. As Wenger said, “he is technically top class.”

Rosický had a preference of using the outside of his foot, whether it be when controlling the ball, passing, dribbling or striking it. Using that part of the foot is very difficult and takes a lot of skill and practice, this highlights how technically gifted he was to be able to control the midfield in that way. It always brings up the question of what heights Rosický could have reached if he didn’t spend as much time out injured. In the eyes of Dortmund fans, he stood out as an exciting young player with the world at his feet, but injuries held him back throughout his career. He still had a very successful career and has now returned to Sparta; the club he started with, and is still part of the national set-up. He may well have become a world-beater if things had worked out a little different.