With Dortmund having a disappointing season for their standards after being knocked out of both the Champions & Europa League and currently 18 points behind league leaders Bayern Munich, perhaps it’s time to starting looking ahead to next season. You can find the best Bundesliga betting tips on these potential transfers if you look around.

After losing the likes of Ousmane Dembele and Pierre-Emerick Aubameyang over the course of the season, summer reinforcements are clearly needed in order for the side to get back to their best. So here are five players I think Borussia Dortmund should go after once the summer transfer window reopens.

Many Dortmund fans would argue that this season has not been Roman Burki’s best so far, meaning a possible rival for the no.1 spot would only bring out the best in the Swiss international if not, a safer set of hands in goal to replace him.

Where better to look than Finland international Lukas Hradecky who has already played in the Bundesliga for 3 seasons now and has also been linked with Dortmund already with his contract up at the end of the season.

Eintracht Frankfurt’s sporting director Bruno Hübner promised that the 28-year-old would prove his worth when he first came over to Germany back in 2015 and has not looked back since. He said:

“Lukas has all the attributes of a modern goalkeeper, with fast reactions, good vision and solid passing.”

Hradecky has improved year-by-year with this season excelling and proving himself to be one of the best keepers in the league with a better goals conceded record (31) than Dortmund’s current no.1 Burki (51).

Having two top goalkeepers in the peak of their careers is not necessarily a bad thing either, as most of Europe’s top teams have a goalkeeper for league games and the other for cup competitions such as with Barcelona with Marc-Andre Ter Stegen and Jasper Cillessen. Most would argue that it brings the best out of them as well in order to prove they are the superior shot-stopper at the club.

Hradecky himself is a goalkeeper who has admitted who likes to have more shots against him which is great to hear for football fans nowadays, as he spoke after his side’s 2-2 draw with Borussia Dortmund back in October:

“I had to make a save every ten minutes today so I didn’t get cold and was always involved in the game,” he said. “That’s the best thing for a goalkeeper.”

Burki has particularly struggled in the European competition this year, conceding 13 in 6 games meaning the signing of Hradecky makes sense as it would take some of the pressure off Burki and bring some healthy competition back into the side which I feel is what Dortmund need to succeed once again.

When the Belgium international joined in January, many fans would’ve wondered if he can be the man to replace talisman Pierre-Emerick Aubameyang after an average showing for his parent club Chelsea in the first half of the season. 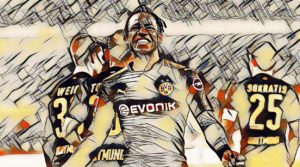 But, 8 goals in 11 games for Dortmund clearly answers that question and Batshuayi himself looks a completely different player with the German side and has saved his side on countless occasions this season alone.

In particular the 3-2 win over Eintracht Frankfurt, where he lived up to his superhero nickname as the ‘Batsman’ came off the bench to score twice and secure all three points for his team after a poor performance until that point.

The 24-year-old himself has admitted to the Express that he “had a difficult time” at Chelsea and “it’s good to be back on track.”

“I was very well received by Dortmund, by the whole club.

“I felt a lot of love, a footballer is stronger when he has confidence.

“I didn’t expect to find my efficiency so quickly.

“This is the real Michy, but I still want more.”

There has been recent talk of Dortmund wanting to make the move permanent after Batshuayi’s performance so far with his price tag looking to being around the €60m mark which to me seems too good a deal to miss out on.

Whilst this may seem like a lot of money, for a player to come in and impress the way Batshuayi has and the fact Dortmund sold Aubameyang to Arsenal for over €70m means they’re making a profit on the sale and investing in a player who has shown similarities to the Gabon international so far since joining. If I were Dortmund I would complete the move before anyone else comes in for the Belgium international.

With Koln looking unlikely to avoid relegation down to the 2.Bundesliga, this means that most of their best players will be looking to move on in order to further their careers including current Germany international Jonas Hector.

Hector has been one of the most consistent performers at both league and international level and with Marcel Schmelzer arguably past his prime, perhaps it’s time to reinvest in the future.

Raphael Guerreiro is another option for BVB at LB, but he often plays and is better placed in midfield. The former Lorient man has also had quite a few problems with injuries since joining the club.

Hector is a full-back who can get forward without shirking his defensive duties with his versatility an additional bonus to what he can offer this Dortmund side. The ability to play left-back, right-back or central midfield means the 27-year-old would be a perfect fit for their brand of attacking football.

The price tag is also nothing with the likeliness of Koln being relegated resulting in Hector’s market value going down considerably. €7 to €8 million is a steal for a German international such a Hector in this current transfer market.

This kind of money is nothing for Dortmund particularly with all the big transfer fees they have collected from the sales of Ousmane Dembele and Pierre-Emerick Aubameyang in recent years, meaning it makes sense for both clubs to make the move happen.

Hector himself will also be keen on making the move happen as he will want to be playing in the top tier of German football in order to reassure of his place in the Germany squad for the next few years. This move seems like a no-brainer for Dortmund.

The young Danish striker has gone from strength to strength ever since he broke into the Ajax side under former Dortmund boss Peter Bosz last season. Still only 20, Dolberg has turned heads at many big clubs all over Europe in the last season or so.

Dolberg’s greatest assets are his intelligence and ability to find space inside the box will make him a unique addition to the Dortmund side. Ideally, the club could make him their backup striker for Batshuayi (should they sign him permanently) for another couple of years. But with Batshuayi and inexperienced Alexander Isak the only two recognised strikers, Dolberg could prove to be another young prolific option/necessity for the German side.

There had been rumours that Borussia Dortmund already had a deal in place with Ajax to sign Dolberg in January but nothing materialised, (or perhaps they’re waiting till the summer?) The Denmark international has immense potential and he can be a real star at the right club should he choose to join Dortmund and look to further his career.

The German international was linked with multiple teams last summer, including Borussia Dortmund. But Draxler ended up staying at PSG, despite the club looking to recoup some of the money spent on Neymar and the imminent transfer fee that have to pay for Kylian Mbappe come the end of the season.

Draxler was a product of Schalke’s youth academy, before he moved to Wolfsburg in search of a new challenge in 2015. He joined then joined French champions PSG in January last year, but he could be tempted to return to Germany after a difficult time settling in Paris.

The midfielder is a well-proven German international as well after winning the World Cup back in 2014 and captained his side to victory in the Confederations Cup last summer. The 24-year-old has shown over the years that he can perform at the very highest level even, though he is still yet to hit what is known as his ‘peak ages’.

Draxler is a real talent and one who I can see not only improve this Dortmund squad but, it’s a move that I can see happening and being beneficial for both clubs and the player himself.

With the next World Cup coming up at the end of the season, should he be picked and play well then his market value will only increase which is why I feel if Dortmund are to make a move, then they’d best act fast.

With the superstar trio of Neymar, Mbappe and Edinson Cavani currently occupying Draxler’s place in the starting line-up, perhaps a move away from PSG may be best for the German playmaker.

Borussia Dortmund meanwhile have players who currently are injured or not at the best so maybe the signing of Draxler will bring a new lease of life into a side that needs to be kicked back into gear. And Draxler even at the age of only 24, can provide them with exactly that.